Gary Anderson: Why all but one F1 team adopted the 'z' floor - The Race
Skip to content
Formula 1

Gary Anderson: Why all but one F1 team adopted the ‘z’ floor

Floors have been the big technical talking point of Formula 1 2021 – not only in terms of the impact on the competitive order, but thanks to the proliferation of what has become known as the z-floor concept.

The regulations imposed a triangular cut on the floor, starting roughly at the rear of the monocoque and tapering inwards. On each side, this means the back of the floor is narrowed by 100mm.

Initially, the majority of teams ran a straightforward interpretation of this concept, but at pre-season testing four outfits – Red Bull, AlphaTauri, Aston Martin and Mercedes – opted for the z-floor.

This concept basically removes a triangular section from the outer edge of the floor, effectively making the floor into an elongated ‘z’ shape. 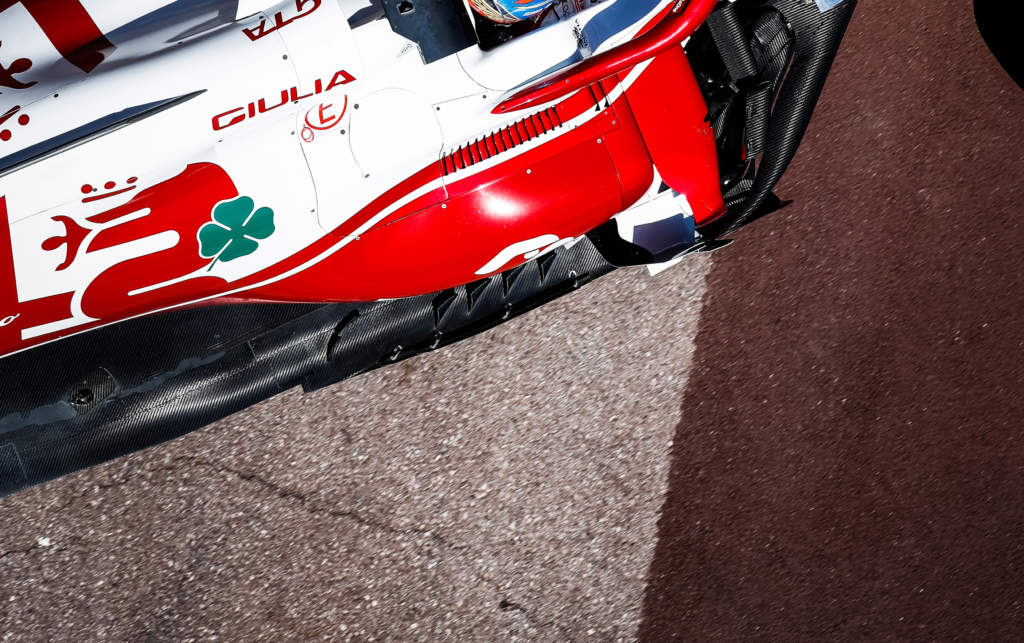 But why, I hear you ask, would you want to reduce the floor area more than you have to given it is this component’s surface area that generates the underfloor downforce? Well, it’s a balancing act between surface area and doing what you can to seal the surface area that is left.

Because of these changes, the teams have prioritised making the front corner of the floor work harder. This has resulted in differences in how the bargeboard system affects the airflow early on and also the outer edge on the first one-third (roughly) of the floor.

The aim here is to make this section work as a diffuser in its own right, scavenging the airflow from underneath that corner section of the floor. 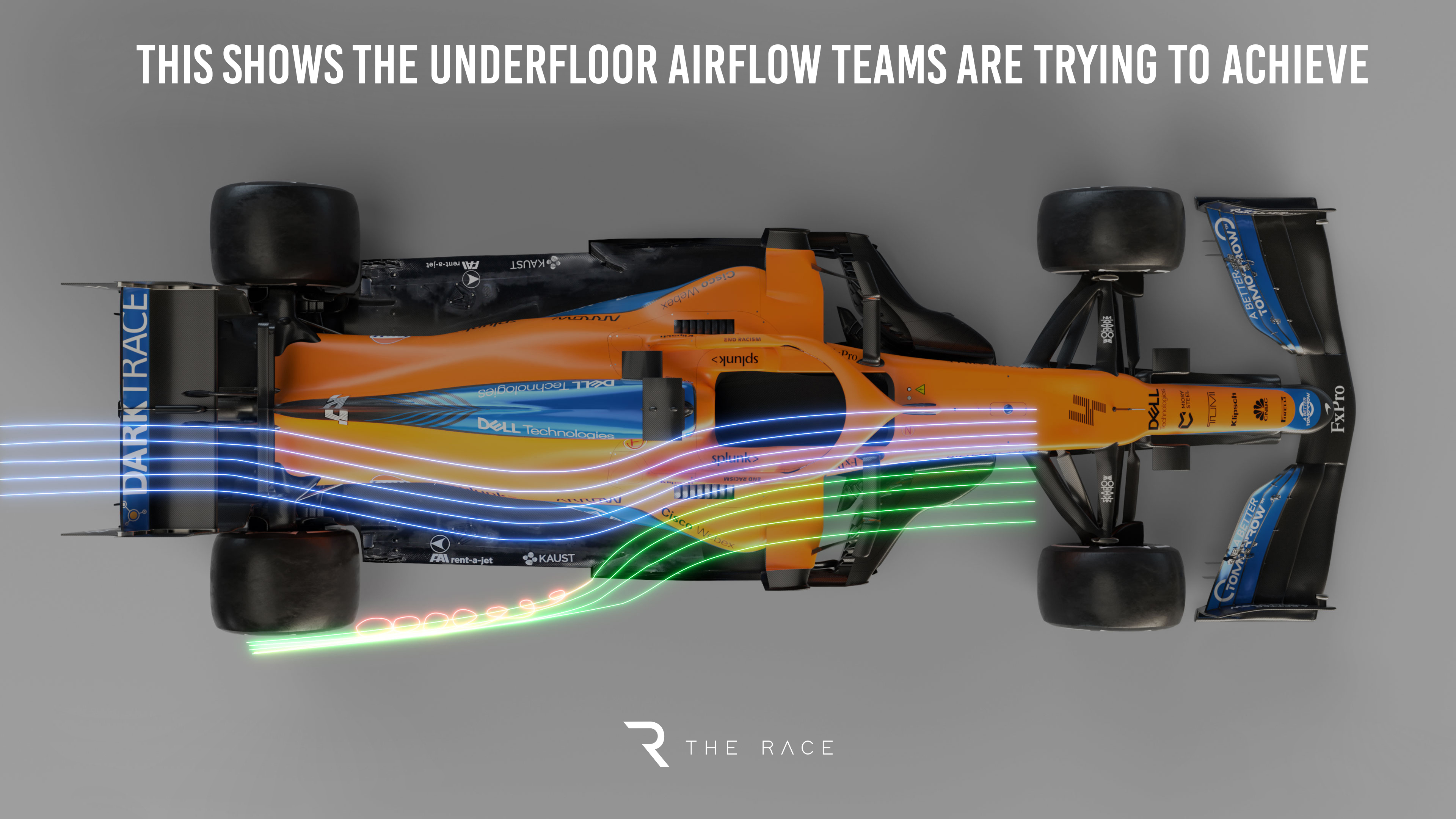 If you can achieve this, it means the airflow that goes under the more central section of the floor will be pulled through by the main diffuser at the back of the car. It, therefore, has further to travel and to fill up the volume of the diffuser will increase in speed – and in doing so generate more downforce.

Also, getting the diffuser and the low-pressure area behind the rear tyres to work as one increases the power of the diffuser generating more downforce again.

To make this all happen, the outer edges of the floor rearwards of where the rectangular cutout starts to create the z-shape need to be as effectively sealed as possible. If this is not achieved, airflow will simply leak under the floor right up to the rear tyres and fill the diffuser volume, meaning that the airflow coming from the front of the car will simply travel slower, reducing its potential downforce.

After the initial four teams ran the z-floor, the rest have followed. Alpine introduced its z-floor for the Bahrain season opener, followed by Ferrari and Williams at Imola. McLaren joined the club in Spain, with Alfa Romeo appearing with a version at Monaco. Nine out of 10 teams now have a version of the z-floor.

But within that concept, the different teams have come up with various solutions to the problem. So I’m going to pick out who I believe has done the best job. That doesn’t necessarily mean it’s the fastest car as that’s a result of the sum of all the individual parts, but nevertheless there are smaller teams that are finding better solutions in certain areas. 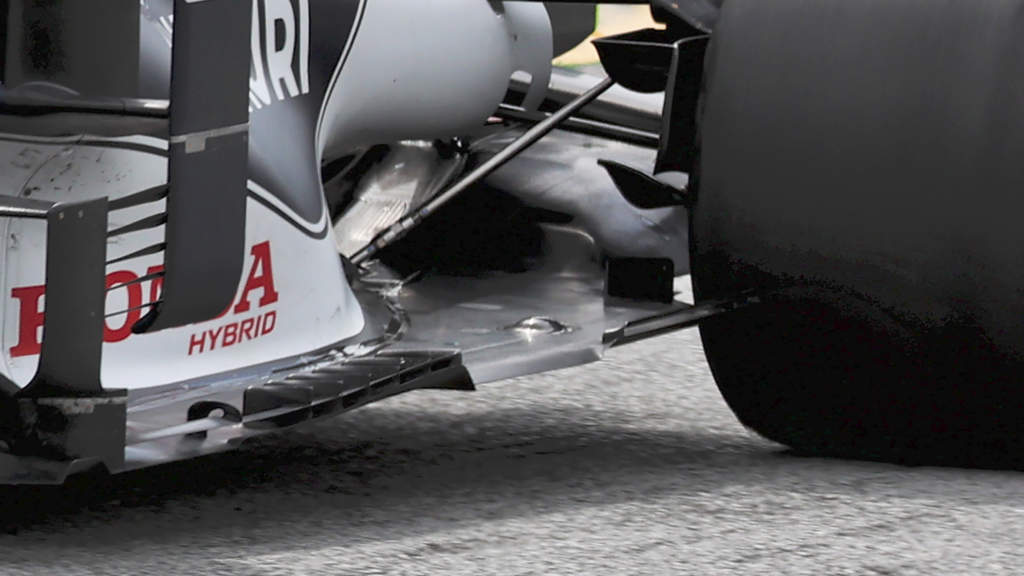 AlphaTauri has put more effort into this area than most others. Its array of turning vanes allows it to influence the airflow early, and by doing this it will reduce the airflow that can leak under the floor further rearward.

Everyone talks about vortex generation as if it is some new thing, but when you have airflow pressure differentials meeting up, this will always generate a vortex of some kind. The trick is to get it to rotate in the correct direction to help with sealing the underfloor.

This Z-floor concept allows space for that vortex to generate. With the conventional triangular cutout, the continuous outer edge would disrupt the vortex and break it up even before it has formed.

In this case, where it comes off the outer corner of the cutout, it needs to be rotating clockwise when viewed from the front of the car – or anti-clockwise relative to the driver. 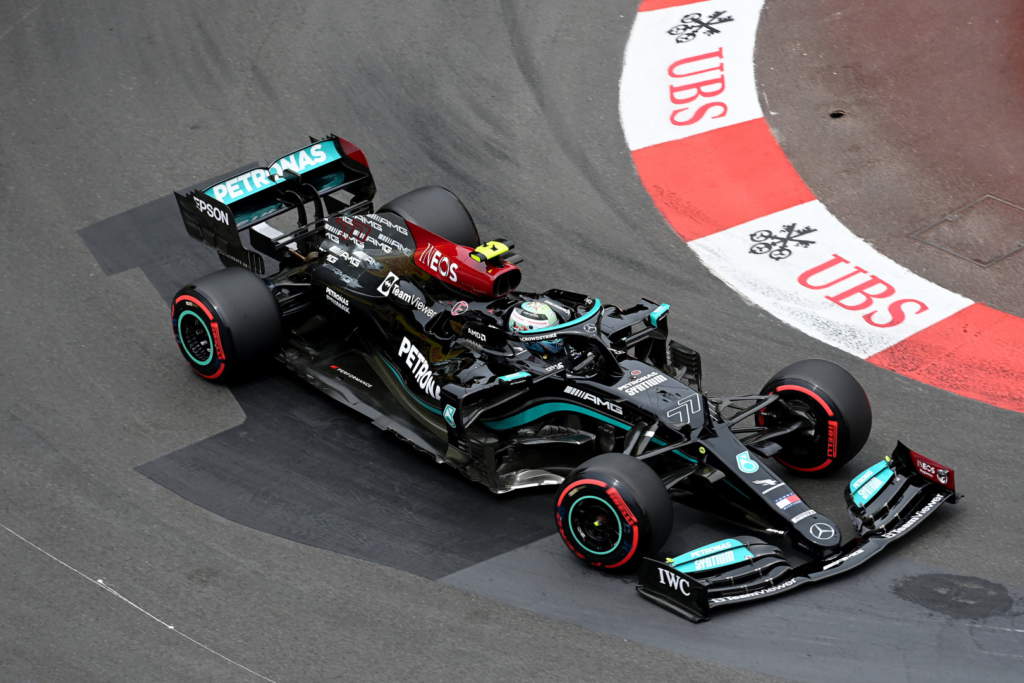 Mercedes and, not surprisingly, Aston Martin have gone for the separate, shorter exit ducts on the front corner. For me, that is all about making the underfloor detail work harder and is not utilising the over-floor airflow to improve the performance of the underfloor airflow.

They are the only two low-rake teams and this could have led them down this route. It is possible that with the low rake, the airflow doesn’t want to stay attached all the way from the front of the car so making the front corner of the car work harder is actually detrimental to the overall floor’s performance.

The rest have varying degrees of similar turning vane detail, with Red Bull not far behind AlphaTauri. We have seen plenty of experimentation with different configurations as teams seek to get the most from the floor as part of the process of evolution.

It’s a bit like the high-rake versus low-rake concept – you can’t just wind up the rear ride height, everything around it has to work in conjunction with everything else so it takes time and effort to optimise everything else before you will see a positive return.

Haas is the only team that has not gone down the z-floor route thanks to its policy of minimising the development spend on its 2021 car. It still has the diagonal cut on the outside edge, which is the conventional interpretation of the regulations.

Video: The best and worst F1 games ever

Formula 1 racing video games have been around for decades, and there was even an era of multiple official titles. But for every good one, there are plenty that are forgettable or outright terrible

31 mins ago No Comments

Carlos Sainz Jr's Ferrari career has started well, to the point that even an Azerbaijan Grand Prix weekend that made him “angry” showcased one of the qualities that have made him a formidable Formula 1 driver

21 hours ago IndyCar No Comments