The F1 near-misses of the best driver who never raced there - The Race
Skip to content
Formula 1, Members Club

Nine-time Le Mans 24 Hours winner Tom Kristensen is regularly called the best driver never to make it to Formula 1, and he came very close around the turn of the century.

Kristensen tested multiple F1 cars, including undertaking a large part of the early development work for Michelin before its return in 2001.

The stories behind why so many of those chances didn’t develop into something more are covered in Kristensen’s book, titled ‘Mr Le Mans’, which is now available internationally after its initial release in Danish.

Kristensen discussed the book and much more about his incredible career in an exclusive interview available to The Race Members’ Club, where he also answered questions submitted by our members. 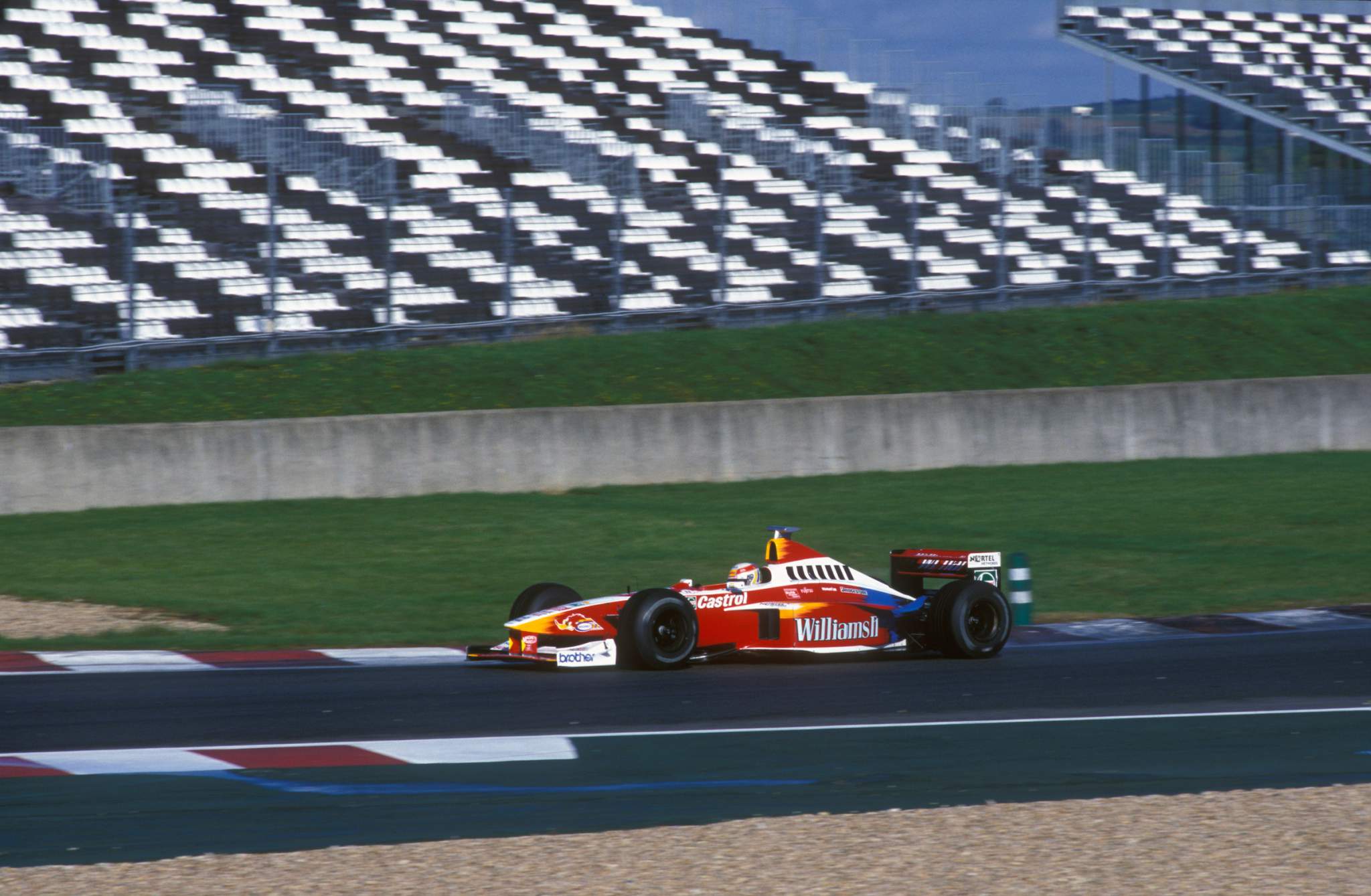 It was a sign of how highly-rated Kristensen was that he was called by Frank Williams personally to test for the team in 1999.

“I was very proud of that call,” Kristensen said in his Members’ Club interview.

“As I tested with grooved tyres, you lost a bit of grip in the slow corners, so probably the best sensation I had in an F1 car, and it’s not the best Williams ever, it was one of the most troubled: the FW21, with the Mecachrome [Supertec] engine.

“They were not very successful, but it was a very interesting car. And the test I had to do for them was proper.

“I would also say that Williams was the team I was closest to get behind the steering wheel [to race] but obviously at the same time there was a lot of other great talent and drivers around.” 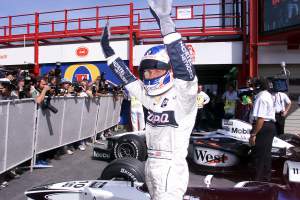 Williams wasn’t short on talent at that time, with Ralf Schumacher coming good, Jenson Button starring during his rookie season in 2000, and Juan Pablo Montoya making waves in America while waiting to be called back to race for the team.

Kristensen continued to test for the team into 2000, primarily as part of the Michelin development programme, but when he signed an Audi sportscar contract that year, BMW wasn’t keen on maintaining an affiliation in F1.

“In 2000 when I did all the Michelin testing, it was initially with Williams-BMW,” he added. “It’s true that after I signed with Audi, I think [BMW motorsport bosses] Mario Theissen and Gerhard Berger realised, ‘Hmm, he’s driving for Audi so maybe he shouldn’t drive our Formula 1 car in testing’.

“Then I was picked up by Jaguar, and that [tyre test] chassis was the Stewart from 1999.” 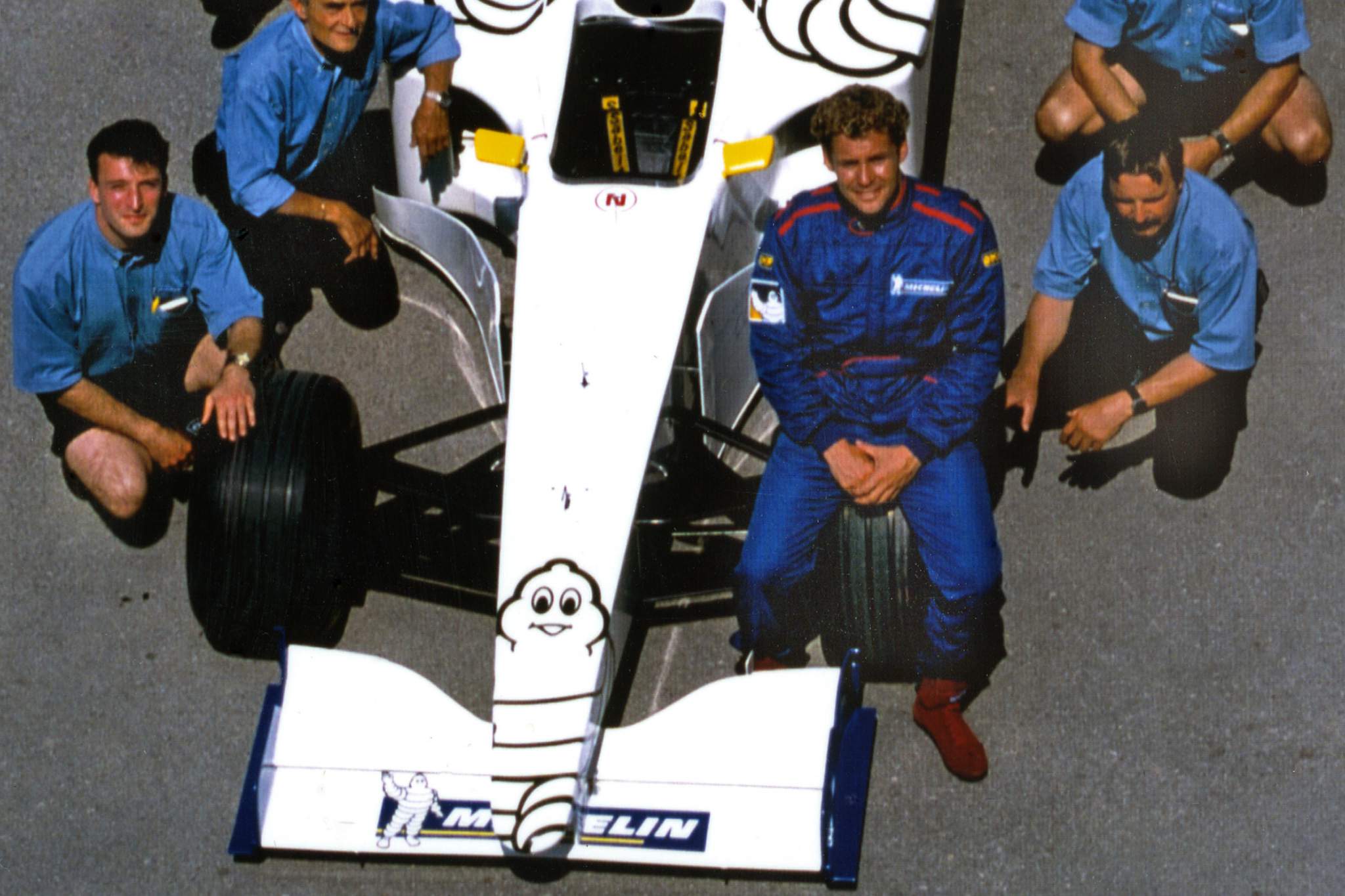 Kristensen was still a vital part of Michelin’s test work, but running in ageing equipment could be a frustrating process.

“I was very happy to do all this mileage in a Formula 1 car,” he said. “It was the grooved tyres. Michelin make incredibly good racing tyres, which I had already experienced and learned to know at Le Mans.

“Now it was their comeback into Formula 1 and it was a very important test programme.

“There were days that were challenging. Particularly when you had an engine that was, 120 kilometres [of running] left in that one, 170km left in another one.

“So we’d cut it down the middle, we go three times 15 laps. And what happens? Of course, on the second run, the 14th lap, the engine goes ‘BFFFFWAAAARGH!’, and then we have to do it all over again. So more mileage for me, but a little bit of frustration sometimes for the technical people.” 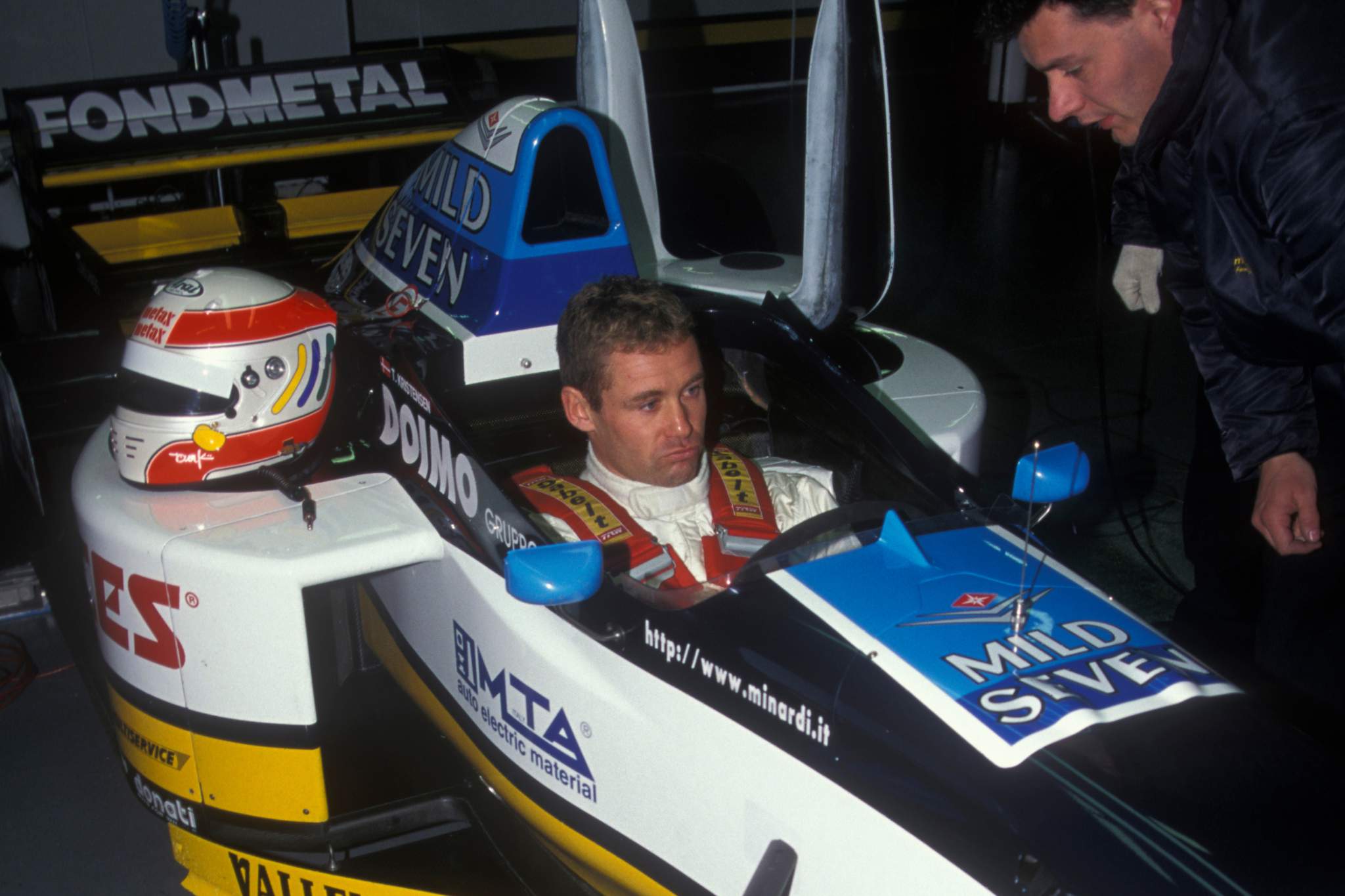 In the interview Kristensen was asked when he felt the door truly closed on his F1 chance, after close calls with teams including Minardi, BAR and Williams. He joked that the door “literally closed” when he decided to race in the British Touring Car Championship with Honda for 2000, as no-one was ever going to go from the BTCC to F1, even if the budgets and resources for the final year of the famous super touring regulations meant “a lot of F1 knowledge” went into those cars back then.

“It was kind of closed, but then I had this run where we won at Le Mans, and I personally had this run that continued,” he added, referencing his streak of six consecutive wins at the start of the 21st century.

“There was always something [F1 related] coming back at me, but I didn’t take it seriously because I really enjoyed the way Audi went about their racing, and I really had found the home where I could give a lot of feedback to the engineers and they would work at it. And that’s how we all felt in this community of the Audi Sport drivers.” 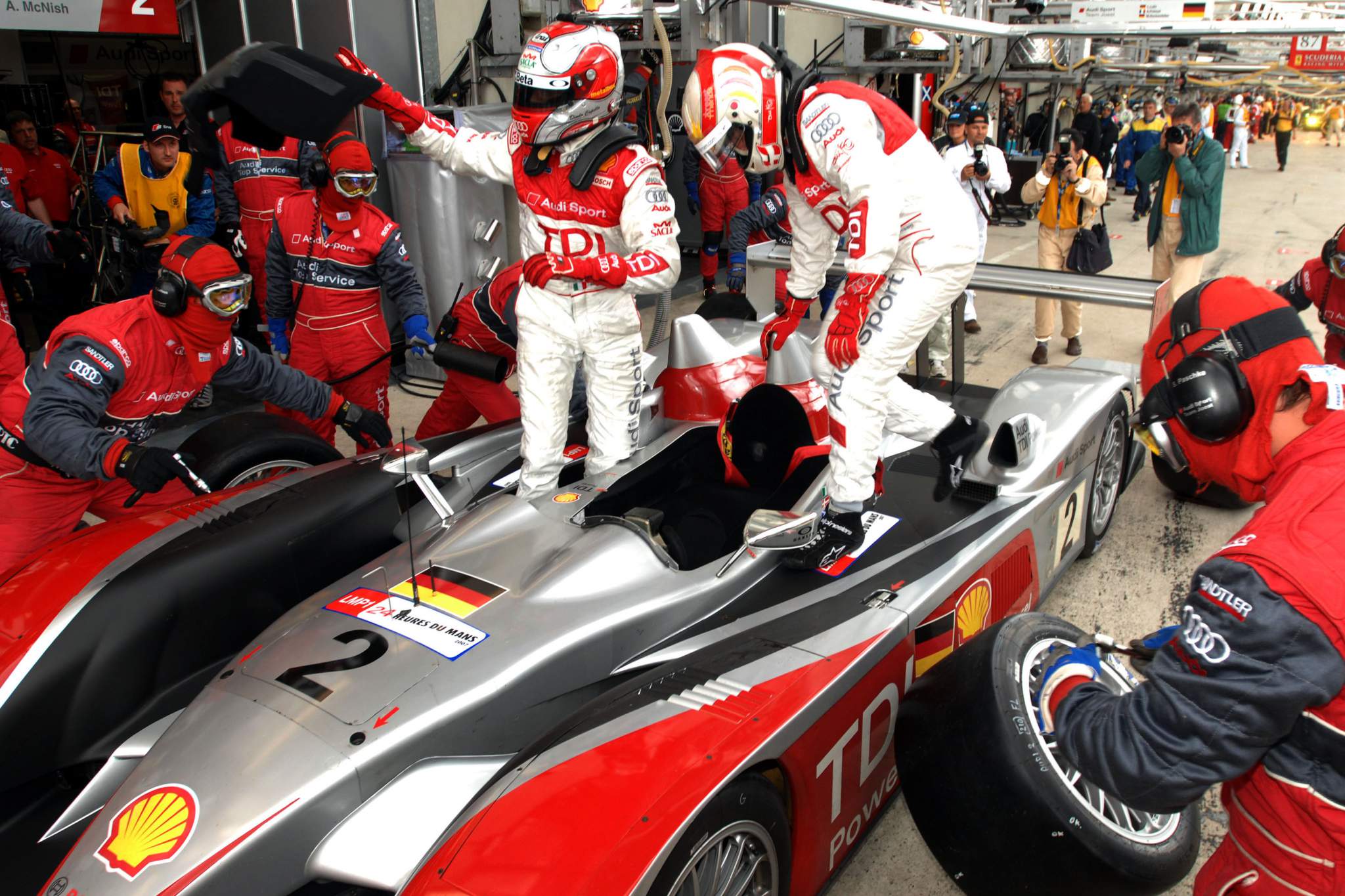 F1 couldn’t offer Kristensen what he was getting elsewhere. Beyond the Williams opportunity, which could have been very well-timed just as the team hit its stride with BMW in the early 2000s, his CV isn’t any poorer for missing out on the other chances that would have likely resulted in a few years spent in F1’s midfield.

The career Kristensen carved for himself in sportscars, where he unquestionably became a legend, was a fine way to spend his peak years.

Even if things hadn’t worked out in endurance racing, Kristensen would have been open to sticking around in the BTCC for longer.

“The final year of BTCC super touring, I was very happy to take part in that,” he said. “And I was very proud of winning in that season and winning the final two races of that series. It would have been good to go further.

“The experience that the best teams had at the top, on the British circuits that were very challenging, everyone knew a trick or two about every track you went to.

“If you went to Thruxton or Oulton Park – I would say Oulton Park was more difficult, but I won there. But at Thruxton with the high speed, I didn’t make a win. Knockhill I made it to the podium, they are very different circuits.”

Compared to single-seaters and prototypes, the rough and tumble of touring car racing took some getting used to.

“Of course, Mr [Jason] Plato made sure I didn’t win at the Brands Hatch Indy circuit, but on the other hand I loved the challenge of that track too.

“In BTCC you could be more physical, which sometimes was definitely very important. In the first half of the year I was more on the receiving end, unfortunately. Maybe you can add Matt Neal to this conversation as well! But there were different occasions where I could have been harder, or smarter.”

The full, hour-long interview with Kristensen is available exclusively to The Race Members’ Club, where he discusses fun stories from his early years racing in Japan, his favourite wins, memories and team-mates from Le Mans, battling back from the concussion he suffered in a DTM crash in 2007, plus the frightening story of his own airborne moment at Le Mans with BMW a year before the famous Mercedes nightmare of 1999 – and how he prevented it turning into another of those scary accidents.