Max Verstappen’s winning time for the Silverstone sprint race was 25m38.426s, almost an hour shorter than the briefest grand prix held so far this season. Yet remarkably, it’s still not the shortest race for world championship points ever held.

Ayrton Senna’s winning time for the 1991 Australian Grand Prix was 63.527s shorter than Verstappen’s. The McLaren-Honda driver covered just 14 laps to win a race cut short by torrential rain on the streets of Adelaide – a mere 52.92km, which is just over half of the distance Verstappen covered.

Jul 17 : Our verdict on F1's first sprint race at Silverstone

The race should have run to 81 laps, but after starting in heavy rain conditions did not improve. Ayrton Senna led McLaren-Honda team-mate Gerhard Berger at the start, with Williams driver Nigel Mansell in pursuit.

Despite the amount of rain and dire visibility, everyone survived the first four laps – although Berger was among those to have a quick spin, losing second to Mansell. Then, Tyrrell driver Satoru Nakajima became the first victim of the conditions when he spun into retirement on lap five. 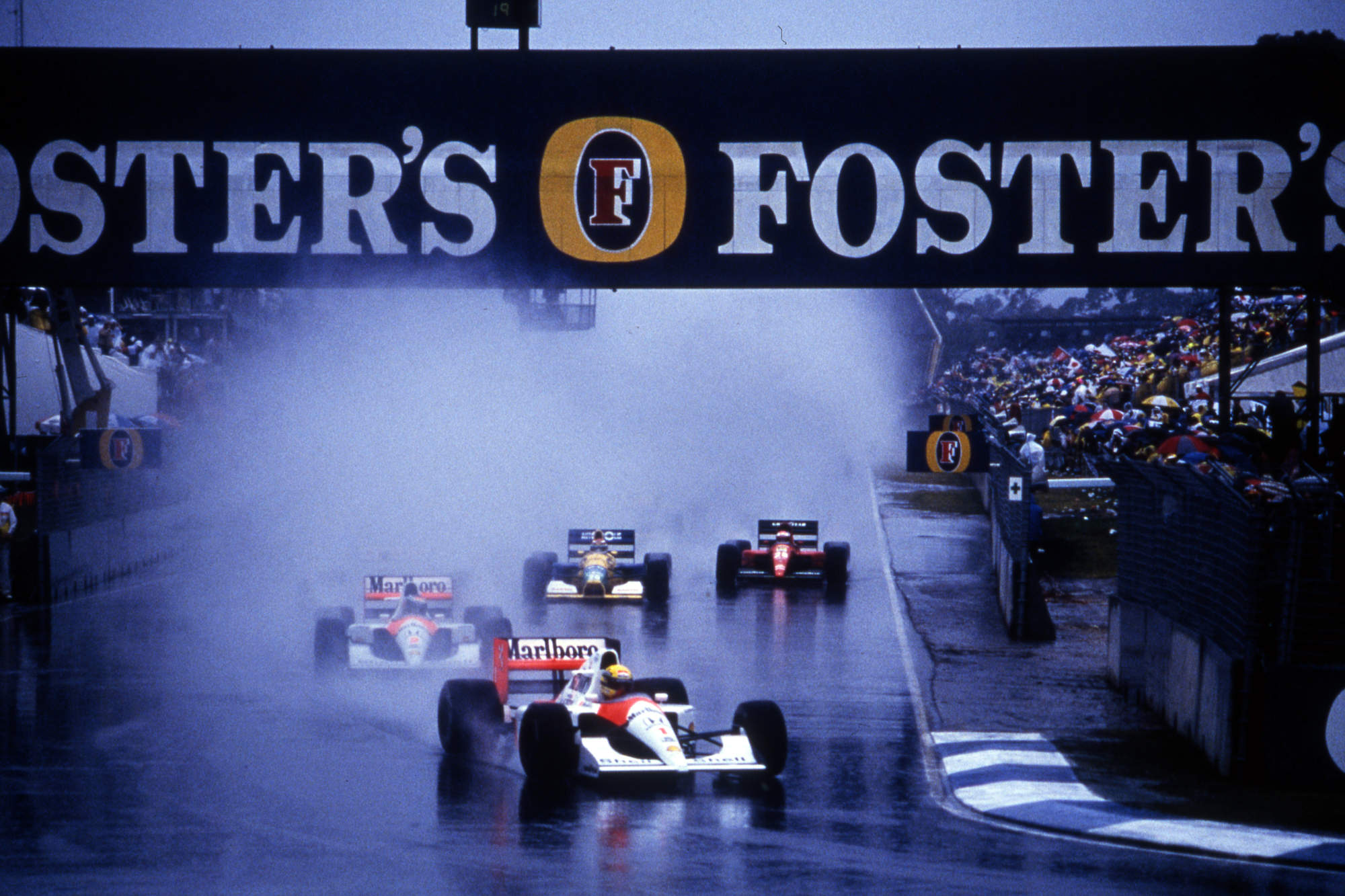 Next time round, the problems really began with Michael Schumacher spinning after contact with Benetton team-mate Nelson Piquet. This led to Ferrari’s Jean Alesi and Modena Lamborghini driver Nicola Larini crashing on the Brabham Straight. Ligier driver Thierry Boutsen was also involved but made it back to the pits to retire, but the other three cars remained on the straight.

Three laps later Pierluigi Martini’s Minardi speared into the wall just short of Larini’s car to add to the wreckage. But the race went on despite the multiple recoveries being undertaken, with Mansell pressuring Senna for the lead.

But things started to go wrong. Mansell spun into the wall on lap 15. But he wasn’t the only one, with Footwork driver Michele Alboreto also spinning. Berger had a spin and recovered before going off again and stalling his engine. Mauricio Gugelmin also crashed his Leyton House.

Up at the front of the field, Senna gesticulated wildly for the race to be stopped, which it quite rightly was. At the point the race was stopped Piquet ran second ahead of Gianni Morbidelli, who was making his Ferrari debut in place of the sacked Alain Prost, with Jordan pairing Andrea de Cesaris and Alex Zanardi fourth and fifth. 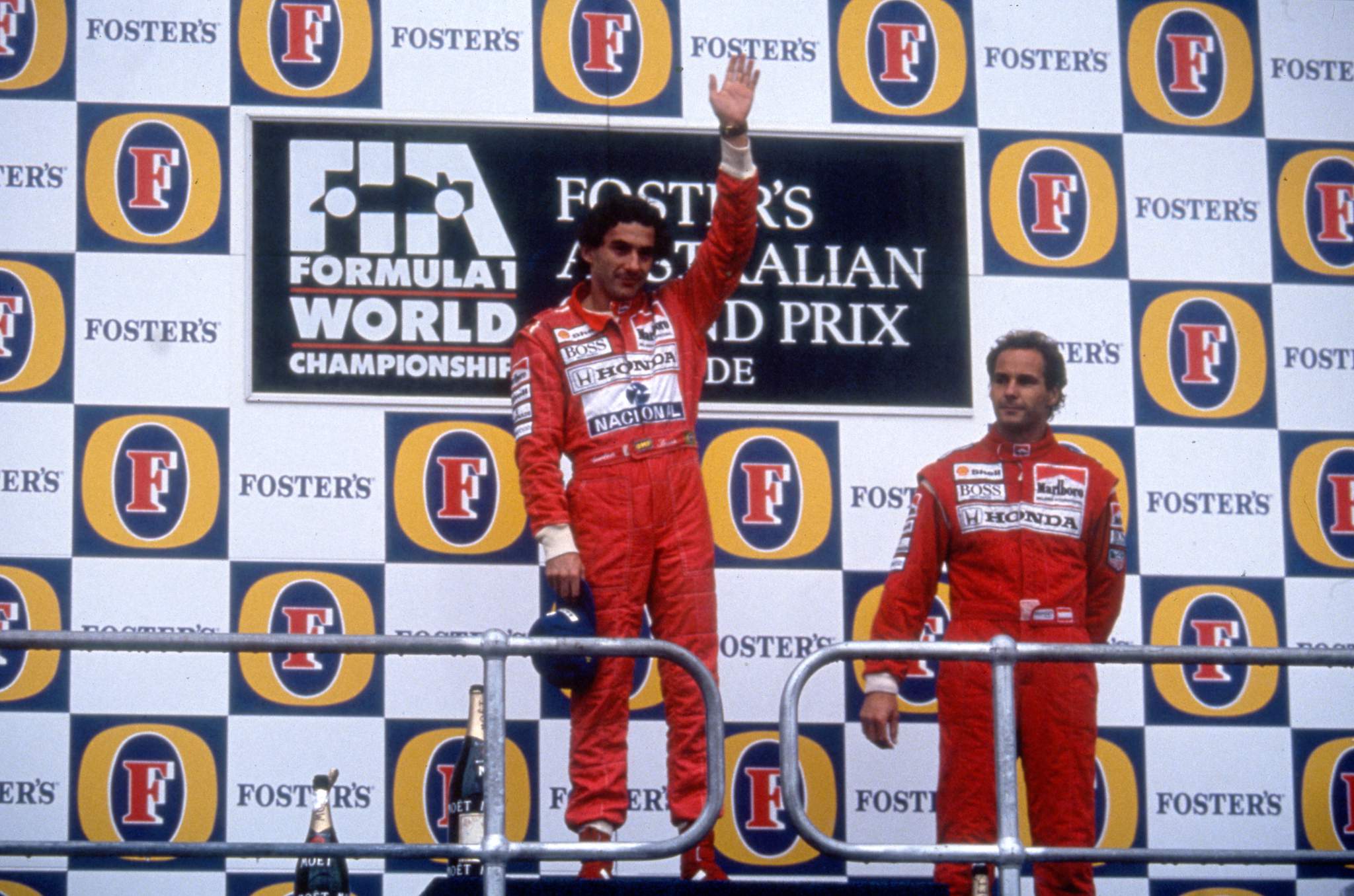 Senna had completed 16 laps when the race was stopped, but as per the regulations, the results were taken on countback to lap 14. This gave Senna victory ahead of Mansell, Berger, Piquet, Williams driver Nelson Piquet and Morbidelli. Given the brevity of the race, only half points were awarded.

As Mansell, who suffered a blow to the head in his crash, said of the race, “everything was OK other than it was a complete joke”.

While the race had lasted longer than the winning time of 24m34.899s given the cars did compete for a couple of laps that were eliminated by the countback, that’s the official number in the history books that stands today as the short race in the F1 world championship.

There have, of course, been even shorter races for F1 machinery that were not part of the world championship. But that’s another story.