How much influence did new publisher EA have on F1 2021? - The Race
Skip to content
Formula 1, Gaming

Jun 2 2021
By Valentin Khorounzhiy
No Comments

The official F1 2021 video game from Codemasters was “well into development” before the EA takeover, which is more about “a great road map for the future”, the studio says.

Video game publisher giant Electronic Arts announced its intention to purchase Codemasters late in 2020, and completed the takeover in February of this year.

But the imprint of the publisher – best known for its FIFA, Madden NFL and NHL series of sports games along with a host of action game franchises – is unlikely to be felt on the content of F1 2021.

“Both Frank and Andrew Wilson have spoken about the great relationship between both EA and Codemasters already and how the cultures fit beautifully,” said Lee Mather, the franchise game director for the Codemasters F1 series, during a producer preview event.

“Obviously F1 2021 was significantly into development well before this deal was even spoken about.

“We’ve got a great roadmap for the future of the game and that’s one of the big reasons why EA were so interested in acquiring Codemasters and working with us – because we’ve got great plans for the title and the partnership now will allow us to grow those and progress them so much quicker.”

What Mather says did have a major impact on F1 2021 is “a great deal of input” from the championship’s drivers, who have played a bigger role in the creative process ever since the initial COVID-19 lockdown led to F1 hosting Virtual GPs in the 2019 video game.

“We were able to spend a lot of time discussing things with them,” Mather said of the teams and drivers. “And as that continued now and the season’s back in full force, we’re continuing those discussions, having regular meetings with them, we’re getting amazing feedback, insight into things that we traditionally didn’t really have such great visibility of. 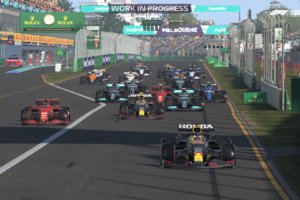 F1 2021 preview: The most customisable edition yet
Read more

“We’ve always had such a great relationship with the teams but now they’re coming to us on a regular basis, wanting to have more input in the game.

“So far for the last two years we’ve had feedback that the handling model’s improving every time, it’s getting closer and closer to what they expect – I think we’ve seen obviously in the esports George Russell jumping straight into a game and his skill being as impressive in-game as it is in real life, and I think that’s only possible because the game now mirrors very much what they [the drivers] are used to.

“So, yeah, we’ve had a great deal of input and that’s something that we’ll continue to use in future titles, as we’ve got here in F1 2021.”

F1 2021 will be released on current- and next-gen Xbox and PlayStation consoles, as well as PC, on July 16 – although the Digital Deluxe Edition of the game will be available three days prior.