We focus on green cars, why not green circuits? - The Race
Skip to content
IndyCar

We focus on green cars, why not green circuits?

We don’t always think of America as a country that is leading the world in terms of being “green”, but the USA has stolen a march in one area of motorsport that could be absolutely vital in the future.

Before you switch off, this feature isn’t out of Greta Thunberg’s diary and it’s not all about saving the environment. Even if you don’t care so much about that, there’s something in here for you about why solar energy could be a brilliant way to safeguard motorsport in the future.

In the modern-day, people move houses more. Many people still value moving into the countryside and may happen across some beautiful scenic areas which play host to motorsport venues as well.

But people don’t research this, and when they move into the area, they complain about the noise as they have not grown up locally and do not understand the economic benefits a circuit can bring, because motorsport isn’t as popular in the common domain as before. 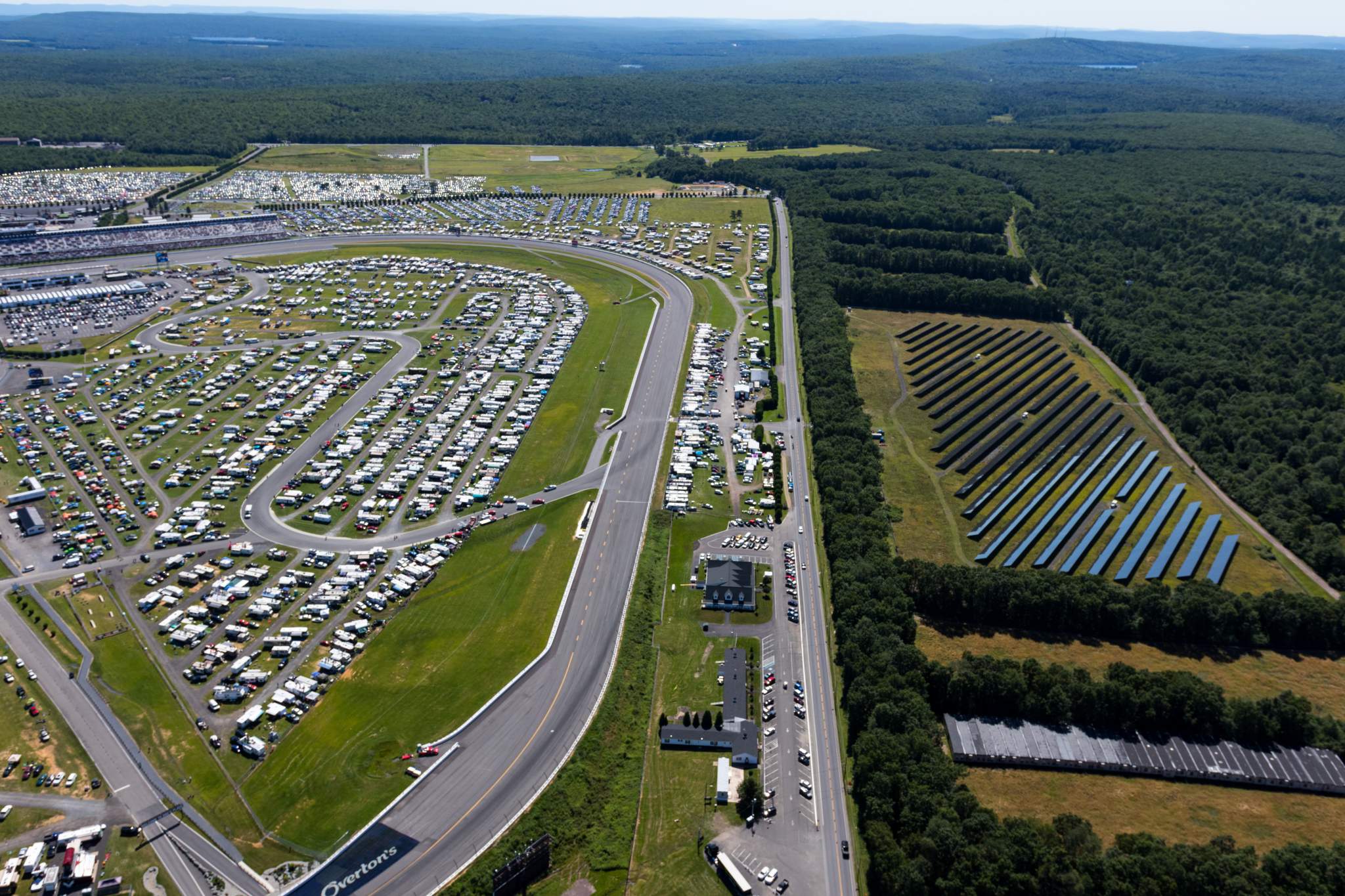 What if that venue powered the home of the person complaining? Providing it with clean energy which is no doubt going to be at a premium as fossil fuels begin to run dry?

You’d like to think that person would change their mind about kicking up a stink.

Admittedly, with the wide-open spaces in the countryside in America, this is less of a problem, but in a quest for sustainability and lower energy costs two venues in particular in the US have provided a blueprint for how circuits can go solar in the future.

It would be unfair to start anywhere other than…Pennsylvania! That might be an odd precursor to anything that isn’t about The American version of The Office, based in Scranton, PA, but it’s in this state we find Pocono (above), which really started the movement for large-scale power from solar for a motorsport venue.

“We knew that Pennsylvania was going to de-regulate their electric billing and the rates were expected to go up anywhere from 30 to 52%,” explains the CEO of the ‘tricky triangle’ as it’s known, Nick Igdalsky, speaking exclusively to The Race.

“So we had looked at several options for renewable energy. First, we actually looked at wind turbines, we looked at natural gas which didn’t work for us.

“The wind turbines surprised us, we actually thought that would be a slam dunk but we didn’t have the necessary sustained winds to keep them moving, and also there was a lot of endangered species of birds that were found within a mile radius, in some of the local sensitive environmental areas so that also would have been two strikes against the wind turbine.

“So it came down to solar. The idea came to fruition just because of the deregulation of the Pennsylvania power and the increase in rates.” 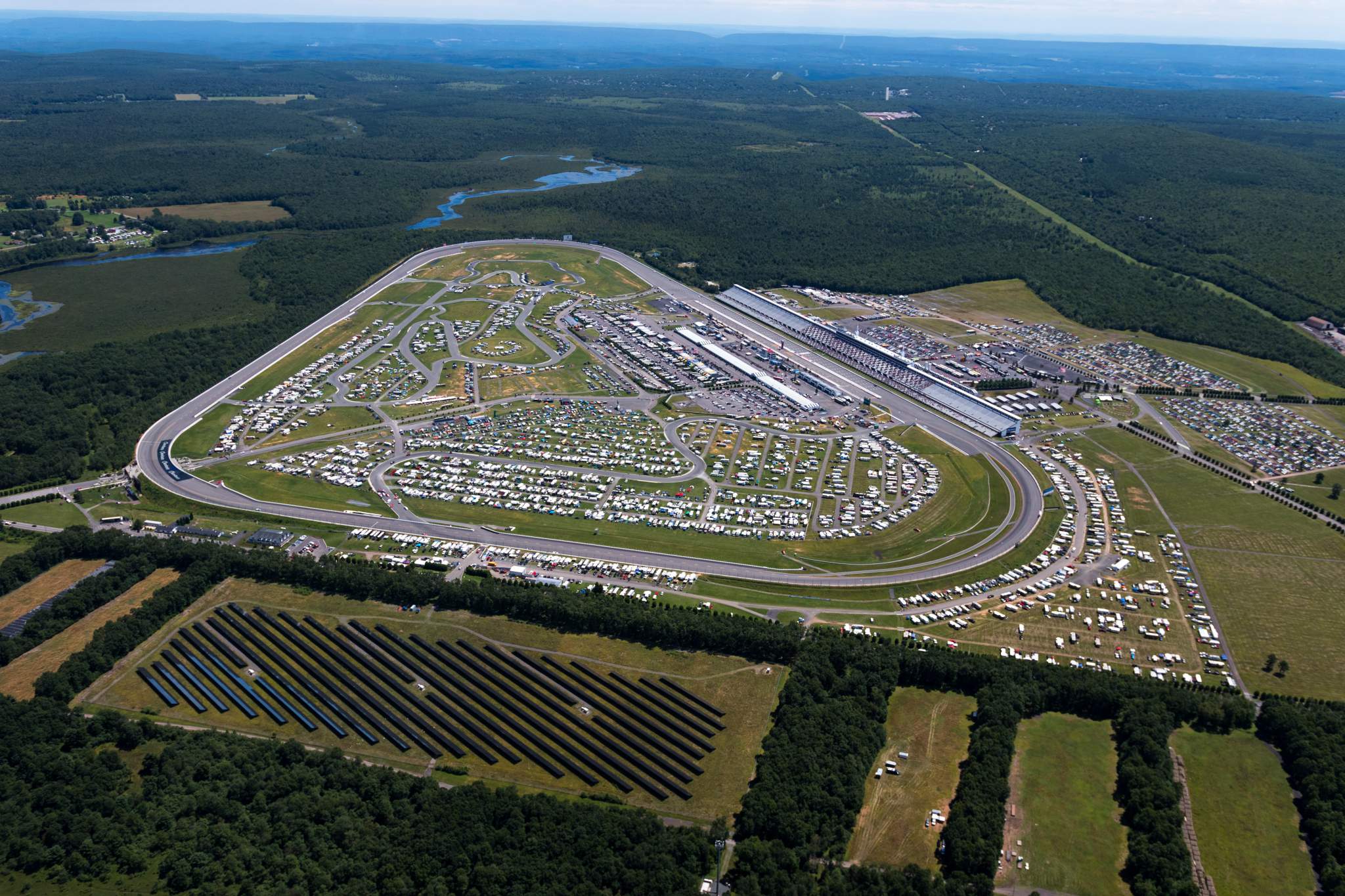 I never thought I would be writing about the affects of endangered birds on wind farm turbines. But in a quest to make motorsport sustainable as a sport that will be here for the next generation to enjoy, these are the questions that must be asked.

The Pocono solar farm opened in 2010. It covers 25 acres and houses 39,960 panels which power the venue and around 300 homes in the surrounding area as well.

Of course, the first hurdle for a motorsport venue when it comes to building a farm is the cost. Pocono’s farm is yet to pay for itself – it should in the next few years – but Igdalsky’s grandfather Joseph Mattioli insisted that where possible American-made products would be used so everything from the panels to some of the woods used comes from American businesses. Another great side effect of the move.

Another variable of Pocono’s farm is that it is managed in-house, so the varying price of electricity can massively affect profit and loss as the venue will get a different amount of money for the electricity it is selling each time.

The cost to build and the uncertainty over the money you return each month may be a stumbling block for some circuits looking into this in the future. But do not fear, another major American motorsport venue has you covered with an answer for that too.

In 2014, Indianapolis Motor Speedway constructed the world’s biggest solar farm sports venue in the world (even if the pictures don’t do it justice!). 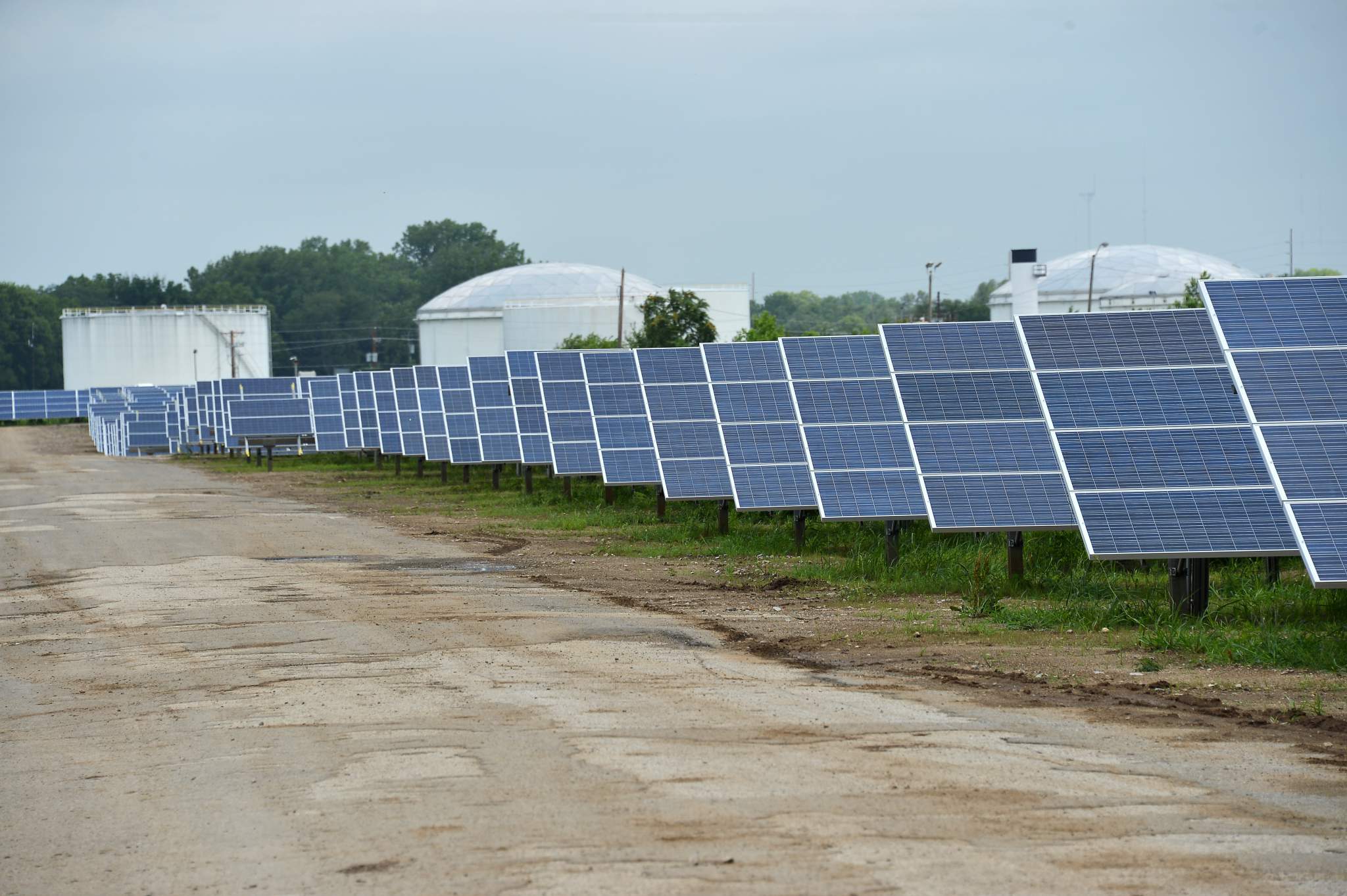 Its 39,312 panels cover 68 acres on the eastern side of the property home to the world famous Indy 500. It was built on an area that used to store things for when Formula 1 visited the venue, and was also used to store items used to ship IndyCar and its equipment overseas when the circus left North America.

However it eventually faded in importance to the point where it was just a field, and the team at the venue investigated how to put it to better use. 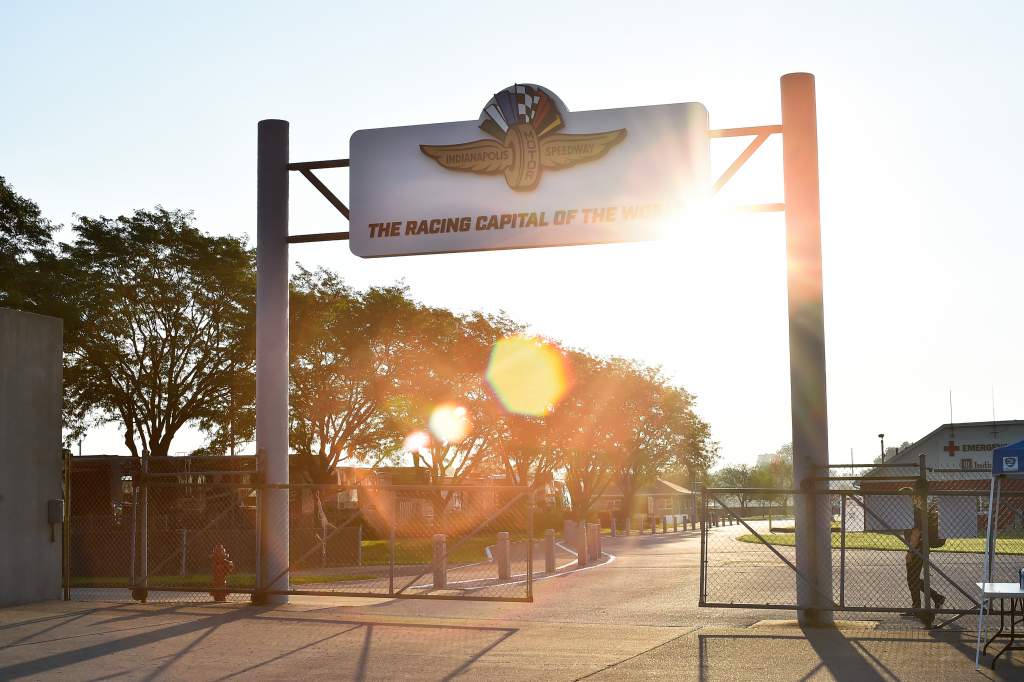 Unlike Pocono, through, the solar farm doesn’t actually power the speedway. The venue agreed a 30-year lease with an outside company that maintains and deals with the power produced, meaning IMS doesn’t always get the benefit of when electricity prices are high, but it does mean it gets the same amount of money each month.

“The reason we ultimately leased the land is because we realised that owning and managing and constructing our own solar farm was not our core business,” Indianapolis Motor Speedway president Doug Boles tells The Race.

“Our core business is motorsport entertainment, so it didn’t take us long to realise that we didn’t want to be in the ownership and management business of a solar farm.

“It’s amazing how often I hear from partners or potential partners, ‘tell us about the solar farm, how’s it work?'” :: IMS president Doug Boles

“The nice thing about a lease component is, it’s a fixed income, if you will. We know what it’s going to be every month, we have some small expenses against it but at the end of the day the people that really know how to make sure they’re pushing the power to the grid in the right way, are the people that are managing it.”

There’s two reasons it doesn’t power the circuit. First, the active railway running through IMS’s grounds would make the logistics of harnessing the power and delivering it into the central part of the speedway really tough. 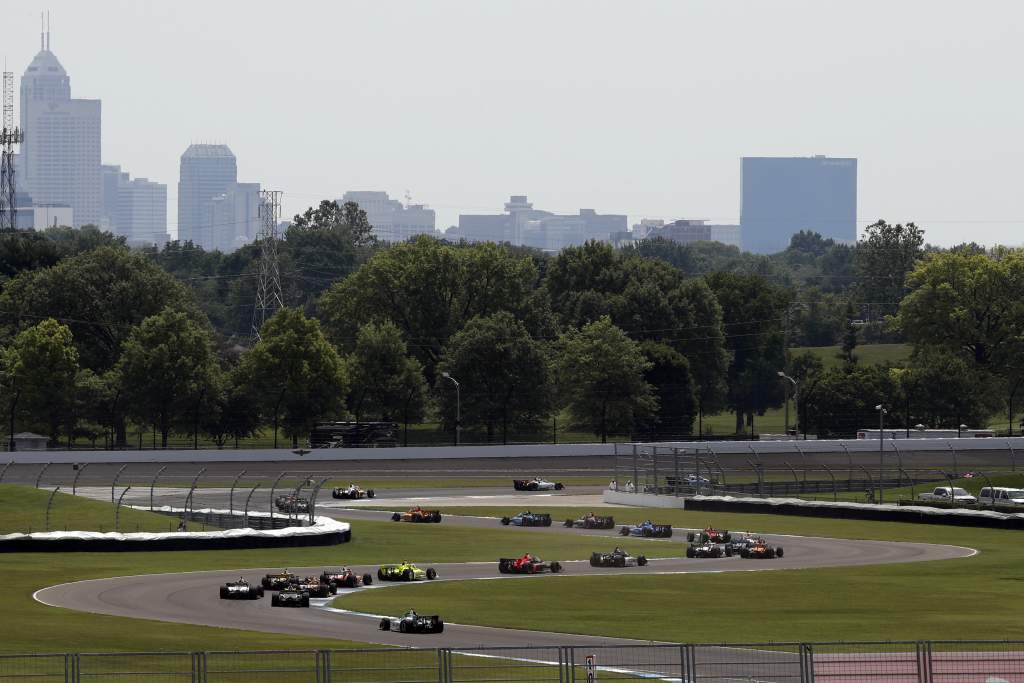 The other part is that – although activity in other months has increased in 2020 since Roger Penske bought the speedway – the venue goes many months using a very small amount of energy. This will also be the case for other circuits thinking about using solar in the future. So it’s easier and more effective to pump the power into the grid.

It’s also produced a perhaps unexpected side affect of making working with big corporate companies over business and sponsorship deals easier, which is certainly something that can help other businesses around the world.

“As far as it relates to folks viewing it as a good thing, certainly in our sponsor conversations as you start dealing with corporations who are now more focused on sustainability and being more green,” says Boles (pictured below with the scissors), “this was a definite, definite conversation point. 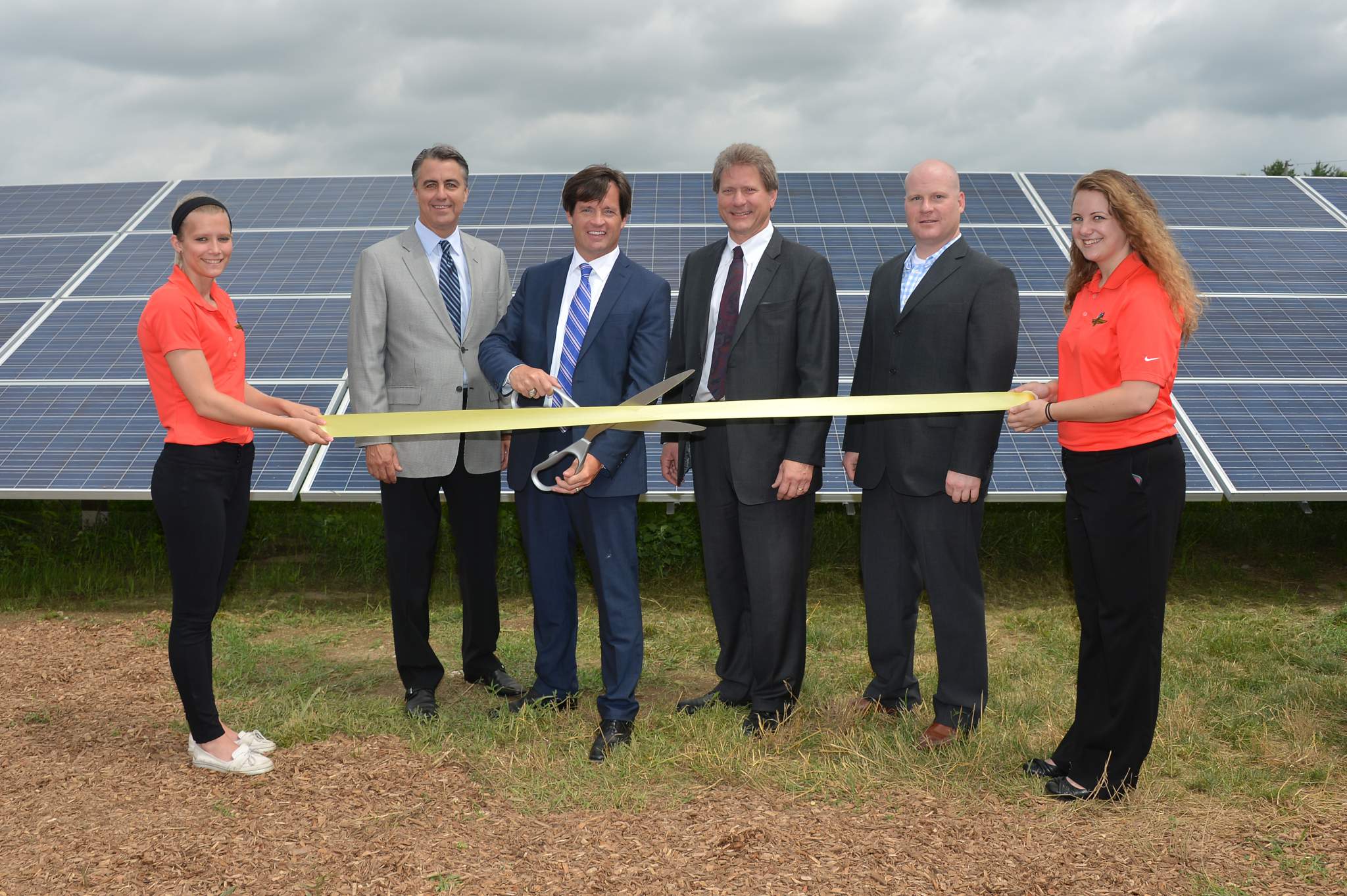 “It’s amazing how often I hear from partners or potential partners, ‘tell us about the solar farm, how’s it work? How much energy are you pushing back to the grid?’ So it’s created some really interesting and positive conversations across all platforms.”

Indianapolis suffers less with noise issues or with people in surrounding areas as one of the most famous races, the Indianapolis 500, provides a huge boost to the local economy and people move to the area to be close it. But Boles’ point on interesting commercial companies is one that’s certainly likely to affect other venues and provides another positive of switching to green power. Even if your circuit isn’t directly using that power!

One thing Indianapolis has in common with Pocono, apart from taking its lead and consulting with the original solar motorsports venue over what to do with its plans, is that they have both taken their farms as a push-off point. In other words, both haven’t installed solar farms and then said, ‘right, that’s enough looking at renewable energy for us’.

Indianapolis is constantly revising ways to harness power inside the actual Brickyard oval in its activities, and Pocono has kicked on to add the world’s largest regenerative organic farm as part of its portfolio, and continues to look at how its venue is powered and ensuring the waste from the venue is recyclable and/or sustainable. 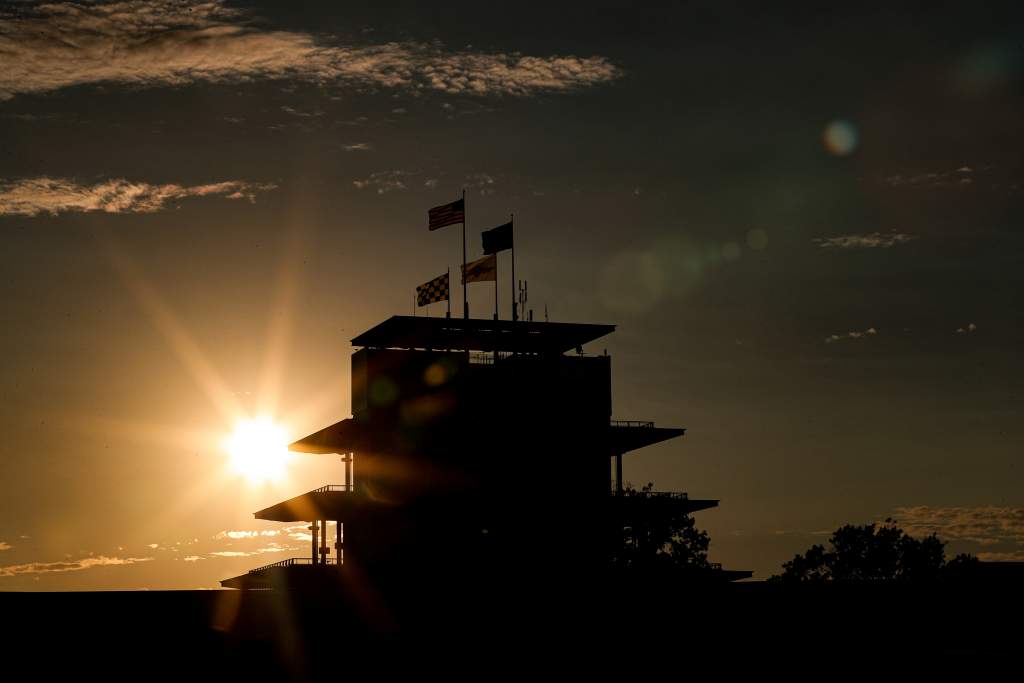 Sorry if we’ve been a bit US centric, but clearly the idea is catching on as Assen in Holland is Europe’s largest solar farm in a sporting venue, and that just proves that elements of both Pocono and Indianapolis are transferable outside. At Assen, panels act as a cover over cars and bikes in parking, which is a win-win for those attending. Even Castle Combe in the UK has a solar farm in the centre of the circuit now.

Coming down to it, even if you’re a global warming denier or plain just don’t care about the effects of fossil fuels on the environment, renewable energies like solar still have the opportunity to provide good PR to residents, make sponsorship deals easier and provide a steady income or an opportunity to profit depending on your model.

There’s also government grants available in certain countries that can help with the building work. Pocono had around 10% of its costs covered. 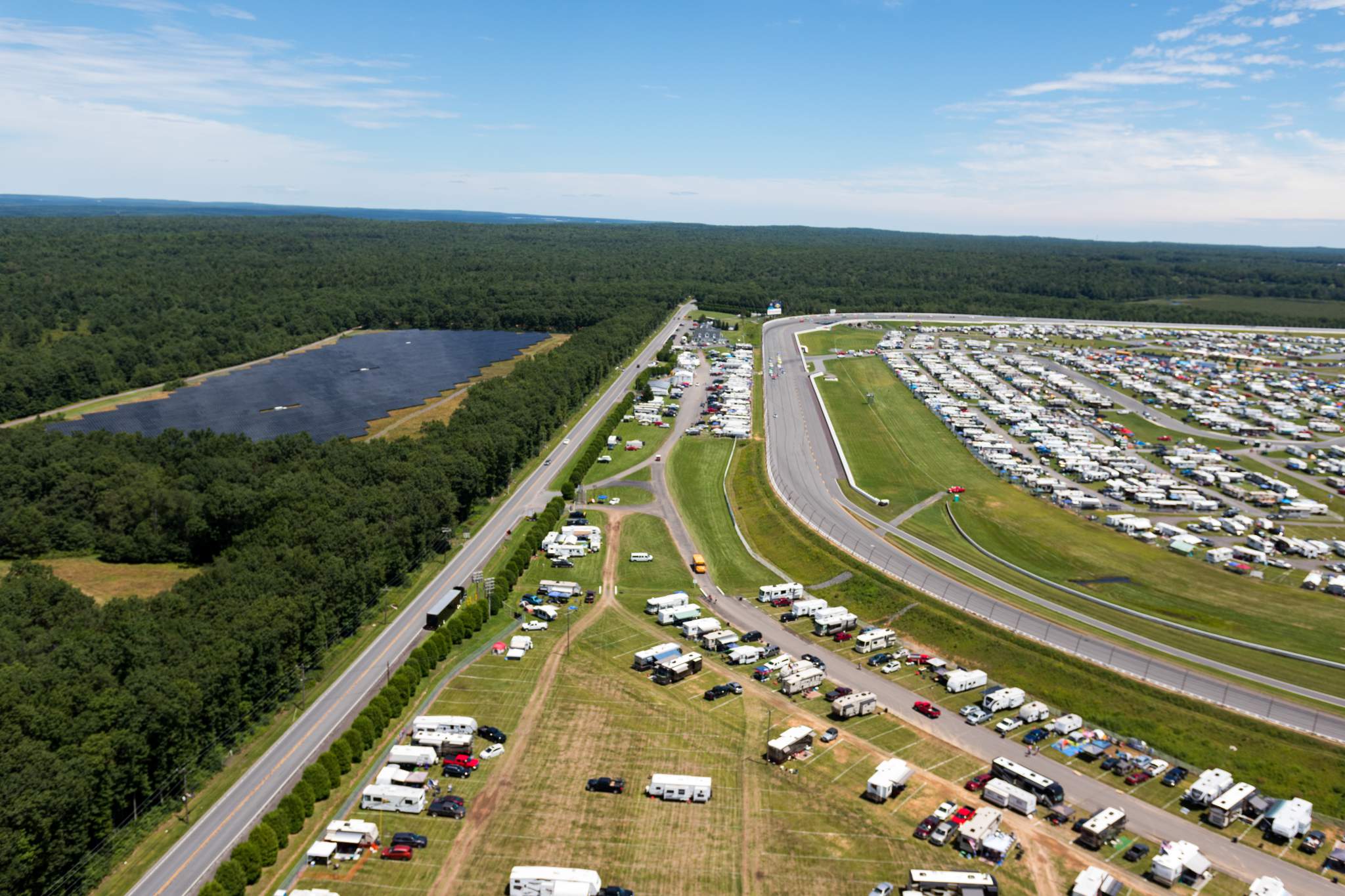 It’s going to cost money to create and it’s not going to be for every circuit. But as so many venues have sprawling, wide open spaces, creating sustainable energy options can provide so many positives.

We can be so focused on cars in motorsport, and for good reason. Formula 1 and Formula E have helped advance battery technology and the former has developed some remarkable fuels as have other series like IndyCar in the States. But why stop at making cars more sustainable?

There are so many benefits to looking at how we evaluate motorsport venues, and they aren’t all to do with how they are powered. Good PR and helping commercial deals both further proof of the positives of sustainable energy for motorsports venues.